Get Rid of Old Cable and Phone Wires 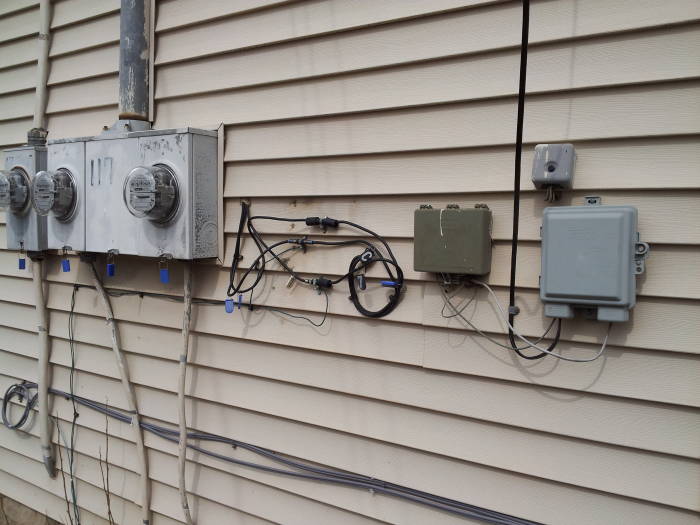 Get Rid of Old Cable and Phone Wires – So, you cut the cord more than a decade ago with your current cable company, maybe you moved onto one of the best Dish TV packages in your area, but unfortunately, you still have kudzu-like cables running from the telephone pole to your house and then all over the side of your house. And, you have cut the cord with two others over the years and still have those unsightly cables running over the outside of your house. Get Rid of Old Cable and Phone Wires

How do we safely remove these without getting electrocuted? And who would do the work, because the cable company is unlikely to be interested in undoing something that not only makes them no money but also makes it harder for them to make money down the road? Most of the lines coming from the street and snaking down the side of our house are cable lines we have never used, leftover from the previous owner. Get rid of them!! Call Plano Texas Handyman at 214-507-3415 to ascertain what boxes and equipment are no longer used and get rid of them. Visit our website for all our capabilities

First of all, cable and phone wires don’t carry current, so it’s safe to remove them. However, it’s critical not to cut into a power line, as you know. Bit the key is to determine which lines carry data and which ones don’t, Plano Texas Handyman can determine this and remove them for you. Get Rid of Old Cable and Phone Wires

The first step is to be sure you know the difference. “If wires are coming in off a pole, the very top wires are high voltage wires. “Under that are the cable and phone lines on the lower level.” The wires connect to your house at a vertical pipe, called a weather head, and the lines dip close to that so any rainwater can drip off before the line carries power down to the meter box.

If power gets to a home from a buried line, it comes up to the meter via conduit.

A licensed commercial electrician from companies like home-proelectric.com/guelph-electrical-panel-upgrades/, who works with power lines and various kinds of cable every day, can tell at a glance what is safe to touch and what needs to be switched off before they start working. Get Rid of Old Cable and Phone Wires

The picture to the left shows two boxes and more wire tangles. One box was for phone service, the other for cable. If you’re not using either, we simply isolate the current working devices and remove the devices and wires that are not currently sending data into your home.

However, if you want to really clean up the mess above that, the power-carrying wire and the abandoned cable and phone lines are pretty close together, and you’d need to be working on a ladder. Having Plano Texas Handyman clean that up is the safest step, and for the cost of calling in someone for that, you could probably get the whole job done and have complete peace of mind that you aren’t making any mistakes.

Removing these wires will cost about $95 an hour. We give free estimates, but because you have already supplied pictures, we have all the information we need. We estimated that it would take an hour or two to go up on the roof and take down the abandoned cable and phone lines. He’d cut them and strap them back as far as possible. We would also remove the phone and cable boxes and all the wiring once connected to those services. Get Rid of Old Cable and Phone Wires

How about those unsightly cable TV dishes mounted on your home from a previous homeowner. We remove them as well and place plastic roof cement in the penetrations to prevent any water damage to the home.

Another option, he suggested, would be to call your cable provider and ask them to remove their old equipment. Its not going to happen, they are not in the business of removing the old devices, they are in the business of selling new systems, quite frankl;y, they could care less how many boxes, cable runs and satellite dishes you have mounted on your home. Get Rid of Old Cable and Phone Wires

If you’re doing any work that might involve a power line past the point where you feel responsibility ceases, you should have Plano exas Handyman do the work. Call Plano Texas Handyman at 214-507-3415 to ascertain what boxes and equipment are no longer used and get rid of them. Visit our website for all our capabilities.