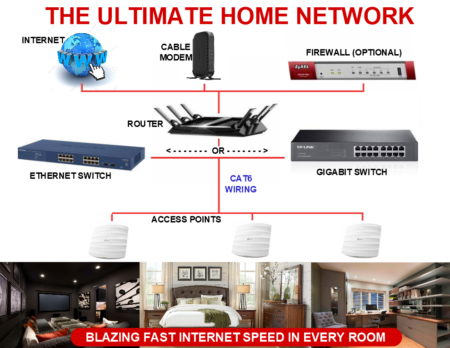 High Performance Home Network – When it comes to home networking, there’s a soup of technical terms, LAN, WAN, broadband, Wi-Fi, CAT5e, CAT6, just to name a few. If you’re having a hard time with these basic terms, you’re reading the right post. Here I’ll (try to) explain them all so that you can have a better understanding of your home network and hopefully a better control of your online life. There’s a lot to explain so this long post is just the first of an evolving series. Ted with Plano Texas Handyman is an expert in designing and installing High Performance Home Network systems, call us at 214-507-3415 for more information. Visit our Technology Page for more information or our Website for more information.

Advanced and experienced users likely won’t need this, but for the rest, I’d recommend reading the whole thing. So take your time, but in case you want to jump to a quick answer, feel free to search for what you want to know and chances are you will find it within this post.

1. Wired networking
We recommend wired networking of major components and hub devices. A wired local network is basically a group of devices connected to one another using network cables, more often than not with the help of a router, which brings us to the very first thing you should know about your network. Wired networking uses a LAN to connect primary devices to switches and wireless access points. High Performance Home Network

The Router is the central device of a home network into which you can plug one end of a network cable. Plano Texas Handyman only installs high performance Gigabit routers for gaming and high speed homes. We recommend CT56 wiring between the router and he primary transmission devices. We also use PoE (Power over Ethernet) equipment to keep costs down and not have to wire an electrical circuit to the auxiliary devices.

LAN ports: A home router usually has four LAN ports, meaning that, straight out of the box, it can host a network of several wired networking devices. If you want to have a larger network, you will need to resort to a switch (or a hub), which adds more LAN ports to the router. Generally a home router can connect up to about 250 networking devices, and the majority of homes and even small businesses don’t need more than that.

Rule of thumb: The speed of a single network connection is determined by the slowest speed of any party involved.

In short, LAN ports on a router allow Ethernet-ready devices to connect to one another and share data.

In order for them to also access the internet, the router needs to have a Wide Area Network (WAN) port. On many routers, this port may also be labeled the internet port.

A switch will add more LAN ports to an existing network. They help increase the number of Ethernet-ready devices that a network can host. You can find a switch with just four or up to 48 ports (or even more). But for a medium to large home, 8 port switches are sufficient for the network.

Wide-area network (WAN) port: Also known as the internet port. Generally, a router has just one WAN port. (Some business routers come with dual WAN ports, so one can use two separate internet services at a time.) On any router, the WAN port will be separated from the LAN ports, and is often distinguished by being a different color. A WAN port is used to connect to an internet source, such as a broadband modem. The WAN allows the router to connect to the internet and share that connection with all the Ethernet-ready devices connected to it.

Broadband modem: Often called a DSL modem or cable modem, a broadband modem is a device that bridges the internet connection from a service provider to a computer or to a router, making the internet available to consumers. Generally, a modem has one LAN port (to connect to a router’s WAN port, or to an Ethernet-ready device) and one service-related port, such as a telephone port (DSL modems) or a coaxial port (cable modems), that connects to the service line. If you have just a modem, you’ll be able to connect just one Ethernet-ready device, such as a computer, to the internet. To hook up more than one device to the internet, you will need a router. Providers tend to offer a combo device that’s a combination of a modem and a router or wireless router, all in one. High Performance Home Network

Plano Texas Handyman installs wireless access points which boosts the connectivity of your home by extending the network to all corners eliminating hot spots and dead spots. Access points are directly wired to the router (which has a wireless antenna) the access points are wireless signal broadcast points.

Wi-Fi range: This is the radius an access point’s Wi-Fi signal can reach. Typically, a good Wi-Fi network is most viable within about 150 feet from the access point. This distance, however, changes based on the power of the devices involved, the environment and (most importantly) the Wi-Fi standard. The Wi-Fi standard also determines how fast a wireless connection can be and is the reason Wi-Fi gets complicated and confusing, especially when considering the fact there are multiple Wi-Fi frequency bands.

Frequency bands: These bands are the radio frequencies used by the Wi-Fi standards: 2.4 GHz and 5 GHz. The 2.4 GHz and 5 Ghz bands are currently the most popular, collectively being used in all existing network devices. Generally, the 5 Ghz band delivers faster data rates but a little less range than the 2.4 Ghz band. Note that a 60 GHz band is also used but only by the 802.11ad standard, which is not yet commercially available.

Depending on the standard, some Wi-Fi devices use either the 2.4 GHz or the 5 GHz band, while others that use both of these are called dual-band devices. High Performance Home Network

Technically, each spatial stream of the 802.11ac standard is about four times faster than that of the 802.11n (or Wireless-N) standard, and therefore is much better for battery life (since it has to work less to deliver the same amount of data). In real-world testing so far, with the same amount of streams, I’ve found that 802.11ac is about three times the speed of Wireless-N, which is still very good. (Note that the real-world sustained speeds of wireless standards are always much lower than the theoretical speed cap. This is partly because the cap speed is determined in controlled, interference-free environments.) The fastest peak real-world speed of an 802.11ac connection I’ve seen so far is around 90 MBps (or 720 Mbps), which is close to that of a Gigabit Ethernet wired connection.