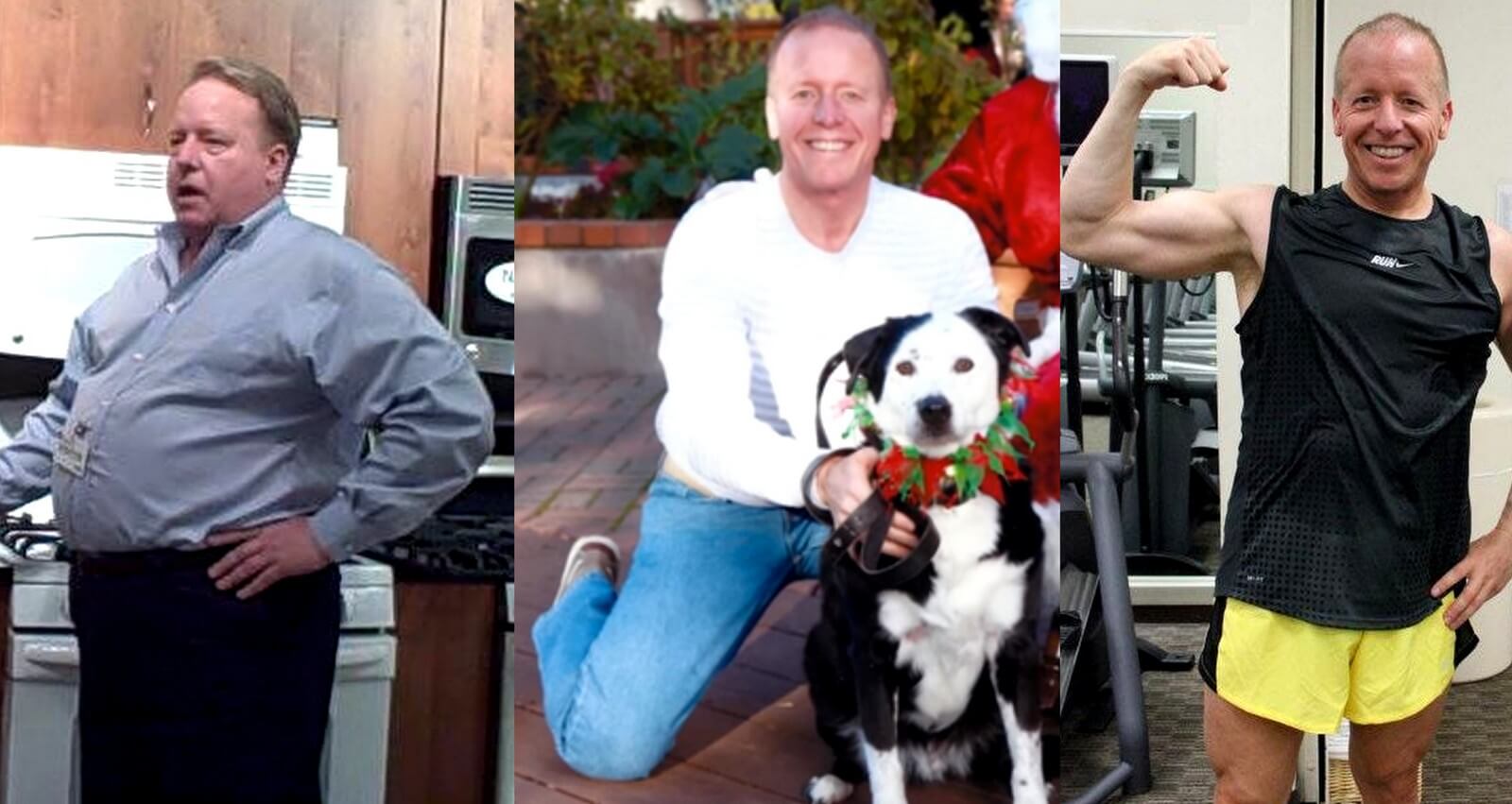 About Eric O’Grey and Peety

In 2010 at age 51, I was 340 pounds at 5’10”, my waist was 52 inches, and I wore 4XL shirts.  I had Type 2 diabetes, my total cholesterol was almost 400, and my blood pressure was out of control.  I had tried and failed every diet plan, diet book, and weight loss gimmick ever marketed in the U.S.  I was taking 15 different medications, including insulin, statins, anti-depressants, weight loss drugs, and medications intended to mitigate the side effects of other medications.  My doctor told me to purchase a cemetery plot, because I would likely need one within the next five years.

As a last ditch effort to avoid bariatric surgery, I consulted with Dr. Preeti Kulkarni, a plant-based naturopathic doctor, who advised me to rescue a dog from a local shelter.  In addition to following my doctor’s advice and switching to a whole food, plant-based diet, I called Humane Society Silicon Valley and asked to adopt an obese, middle-aged dog so we would have something in common.  And that’s how I met Peety, the 7-year-old dog who rescued me.

Over the next year, my weight dropped to 180 pounds, my waist was reduced to 33 inches, and my shirt size changed to medium.  My type 2 diabetes and all my other health problems were reversed, and I no longer take any medications.  Today I am 57, but feel like I’m 25, and I’ve sustained my results for 5 years.

When people ask how I turned my life around, I point to Peety. I would not have reversed my physical problems without first correcting the underlying causes of my obesity, which were caused by my standard American diet, my sedentary lifestyle, and because I became reclusive and stopped caring about myself and others.

I was unconscious until Peety came into my life, and I am now a better person in every way because of what he taught me.  Peety’s love for me was absolute and unconditional, which taught me the meaning of true friendship and how to love myself and others.  Peety believed I was the greatest person on Earth, so I decided to become the person he believed me to be.  Because Peety was completely selfless towards me, he taught me to care about myself and to be more selfless toward others.  And because Peety helped me believe in myself and again, I was able to lose weight by sticking with my new healthy lifestyle and walking him for at least a half hour twice each day.

After Peety and I each achieved our optimal weight and overcame our health problems, every aspect of our lives improved, both personally and professionally. Peety and I made many new friends and went on many adventures together.  I developed an interest in long distance running, and Peety remained my best friend and biggest fan.

Peety got cancer and passed away in my arms on March 11, 2015, which was the saddest day of my life.  But then, in August 2015, after a race, I felt the call of another dog looking for me, and immediately drove to Seattle Humane.  Once there I met Jake, a 4-year-old Labrador retriever mix who had been abandoned and was placed for adoption just four minutes before I arrived.  Jake and I bonded immediately at first sight, and I adopted him on the spot.  Jake turned out to be the best running partner I could have hoped for, and like Peety, now travels with me almost everywhere.

I currently live in Spokane, Washington and am available to travel for corporate and non-profit inspirational and keynote speaking opportunities. For availability and rates, please contact Hachette Speakers Bureau.