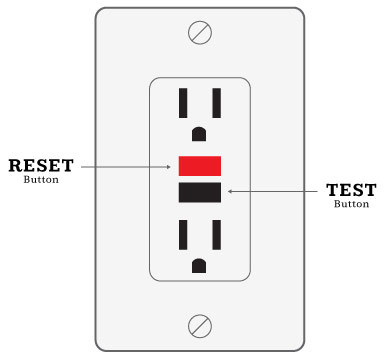 GFCI Outlets – Is a GFI tripping for a ground-fault? If you are pretty sure you need to troubleshoot a ground-fault itself, you may want to go to Tripped GFI — Why? or Troubleshooting a Ground Fault. Otherwise, keep reading. Or Call Ted at Plano Texas Handyman 214-507-3415 to discuss the installation of your Drip Irrigation System. Visit our website at www.planotexashandyman.com for more information.  GFCI Outlets

NOTE: A brand new GFI comes from the factory in a tripped state and cannot be reset till it is hooked up right and power turned on.Overprotecting gets confusing. When homes are upgraded, PEOPLE OFTEN THINK GFIs NEED TO BE ADDED in bathrooms, kitchens, and elsewhere. They are under the impression that the outlets there are not already protected. This may not be true. It doesn’t actually hurt to double-protect, but it can get confusing. For instance, if something at the bathroom outlet tripped a GFCI, it might trip the device that had been added right there as an “upgrade,” or else it might trip the original one in the garage — whichever one happened to respond more quickly. If you don’t know the complication, you won’t be looking in the right place to restore power.

Trouble retrofitting. Besides having to hook a GFI up correctly, anytime you introduce GFI protection onto existing wiring and existing loads, you may find unexpected tripping. Although this could be detecting a shock hazard you weren’t aware of before, there are also a few wiring conditions from the past that are not GFCI friendly. One unintentional condition would be where a ground wire is contacting the neutral side of a receptacle. Some intentional conditions would include places where the neutrals of two circuits are unnecessarily (and improperly) combined in a multi-gang box, or where the neutral for lights of a GFCI-protected 3-way switch system is introduced from somewhere ahead of the GFI you put in.  GFCI Outlets

Line and load – When referring to an electric device that can be connected to another one, such as a receptacle, line refers to the wires feeding it from the panel, which is upstream from the device in terms of the flow of electricity. On the other hand, load refers to devices on the same circuit that are downstream of the one in question. A second meaning for load is the magnitude of the energy consumed by the devices on the circuit.  GFCI Outlets

Tripped or just dead? If a ground-fault interrupter is giving trouble, can you tell the difference between its (re)tripping and its simply failing to reset? The reset buttons of newer GFIs (from 2003 on) will purposely not catch hold if they are not receiving power or are not hooked up right. A tripping button, on the other hand, will generally catch hold for a split-second or at least make a mechanical sound when you try to reset.

Quirks of a common brand. I have found that some of the Leviton GFIs (late 1990’s?) can be tricky to reset fully; if you push that button in more on one side than the other, it may not reset both the hot and neutral contacts; just retrip and try again. As a separate tip, by 2007 Leviton GFIs’ buttons have lost their color, and the reset button is so recessed that it doesn’t “look” tripped when it is. These also may need more force than you are used to, to reset them. Plus, lately the line and load terminals of some Leviton models have traded places, breaking their tradition and undermining the advice people are often given to hook new GFCIs up the same way as the old was.  GFCI Outlets

In this diagram the GFCI to the left is hooked up so as to sense and protect other outlets besides itself. The one to the right is connected so as to pass normal power (no GFCI protection) on to other outlets.  GFCI Outlets

Location. In the U.S., and in some respects in Canada, GFCIs have been required since 1973 to protect more and more locations in new homes. See the Location details below. This does not mean that each location requiring such protection has to have its own GFCI device. One device will usually be protecting several normal-looking outlets downstream from it. So if outlets have gone dead in bathrooms, kitchen, dining room, garage, laundry, or outdoors, there is a very good chance that a GFCI somewhere has tripped off.  GFCI Outlets

Shock prevention. Understand that 99% of the time GFCIs save us by not letting us have their electricity in the first place. Long before you are about to use a protected appliance or light, the GFCI will have sensed most faults and cut power off. The other 1% of the time, you actually start to get shocked, and the GFI trips power off.  GFCI Outlets

Tripping — inconvenient but not false. Besides preventing shock, it is also common for a GFCI outlet or GFCI breaker to trip for conditions that might not put you in any danger. This is because the device can’t tell the difference between a human body and a wire or a pipe or water. A GFI is very sensitive to small “leaks” of current, even harmless ones, off from the intended circuit. For instance, it will trip if the bare ground wire in a box happens to be touching the neutral screw of a protected receptacle. Often the tripped GFI will allow itself to be reset by the (red) reset button, since the cause of its tripping was a passing thing. For a technical treatment of How a GFCI works check this by Sam Goldwasser.

Which button? One of the silly ways a GFCI outlet will trip is by a person accidentally pressing the test button. This may be a visiting child, or it may be that when someone is unplugging something from the GFI, their thumb happens to press on the test button. When you are purposely resetting (to restore power) or testing (to cut off power) a GFCI, you will need to look hard for the little letters etched in the buttons to know which one to push.  GFCI Outlets

Which GFI? It is unrealistic for a homeowner to be expected to know where all the GFCIs are in a home, or to know which other normal outlets will be dead from the tripping of a given GFCI outlet. Still, if you have an outage of the receptacles in one of the rooms mentioned above, it may help to look for GFCI outlets in all of those areas and to reset them all. The reset button will need a forceful push. Avoid the test button.  GFCI Outlets

The search to find all possible GFIs needs to be persistent and thorough. It may be that the bathroom and outdoor outlets are dead from a GFI in the garage that is never used itself, because it is behind a pile of storage boxes. Or a set of kitchen plugs has gone out because of the GFI hiding behind the heavy hutch in the dining room or nook.

Doing the TEST. On most GFIs is a statement to “Test Monthly”. That means pushing the test button, seeing that the reset has popped out, seeing that nothing will run using the outlet at that point, and then pushing the reset. The point of this is to see if the device is still sensing properly, so as to do its job of stopping electrocutions. GFIs DON’T HAVE A HIGH RATE OF FAILURE in regard to sensing ground-faults, and when they do fail in this sense, they will still run things (e.g., a hair dryer). Recent GFCI design requirements seem to be making the test button unnecessary: new GFCIs must fail to deliver power if the GFCI becomes incapable of reacting properly to faults.

Bad GFCI? Of course, they can fail in other ways, as when they WON’T run things. But BE CAREFUL NOT TO ASSUME THE GFCI IS AT FAULT. There could easily be an “open” upstream from it. If someone added your now-dead GFCI unnecessarily when upgrading, the more original GFCI may have tripped somewhere ahead of this one. Above all, DON’T THINK THE GFCI IS DEFECTIVE WHEN IT KEEPS TRIPPING or will not let itself be reset. I have come across only two cases of defective tripping. GFCIs trip for reasons, including misconnections and an incompatibility with a few motors, treadmills, UPSs, dimmers, and fluorescent lights. But most commonly it is for various faults downstream in wiring or plugged-in appliances — both dangerous and harmless faults.

Call Ted at Plano Texas Handyman 214-507-3415 to discuss the installation of your Drip Irrigation System. Visit our website at www.planotexashandyman.com for more information